Vietnam continues to work on ensuring sustainable and balanced trade relations with the US, Prime Minister Pham Minh Chinh has said.

The US Department of Treasury’s conclusion over the lack of evidence to suggest Vietnam has been manipulating its exchange rate for unfair trade gains shows strong efforts of the country’s entire political system in this issue.

Prime Minister Pham Minh Chinh gave the remarks at a recent meeting with the State Bank of Vietnam (SBV).

“In the coming time, the SBV and other government agencies should continue to work with the US sides in drafting an action plan to ensure sustainable and balanced trade relations between the two countries,” said Chinh.

“The move is aimed at supporting economic growth and address concern of businesses and people, while ensuring the safety for banking operation,” added Hong.

Referring to credit as a core issue in the management of banking policies, Hong said the SBV would continue to channel credit inflow into priority fields, instead of risky businesses such as real estate or stock market.

Among key measures, Hong said the central bank will continue reducing the ratio of short-term capital for medium- and long-term loans (currently at 40%), or imposing the limit for loans in stock market investment.

Hong revealed the country’s credit-to-GDP ratio has reached over 140%, the highest among lower middle-income countries.

“Such situation would put pressure on macro-stability,” stated Hong, urging the PM to provide instruction towards the harmonization between monetary and capital markets.

While small and medium enterprises (SMEs) make up 90% of the total number operating in Vietnam, their access to capital remains limited due to lack of financial capabilities, modern corporate governance and feasible business strategies, Hong said.

“The government should provide greater support for SMEs, while the SBV would request banks to simplify procedures to facilitate credit access for banks and people,” added Hong.

Hong also raised the issue of increasing registered capital for state-owned commercial banks, saying otherwise they would struggle at providing sufficient capital for the economy.

“This would also impact the government’s target of having at least one bank in the top 100 Asian banks in terms of assets by 2025,” Hong noted.

In terms of promoting digital banking, Hong suggested the soon finalization of legal framework for new issues, including peer-to-peer (P2P) lending or crypto currency, while further encouraging innovation in the banking sector. 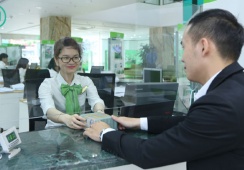