The government expects a budget deficit of $86.7 billion, or 3.7% of the GDP, in the next five-year period.

The government is expected to keep public debt at the maximum of 60% of the GDP, lower than the 65% ratio recorded in the 2016-2020 period, while government and foreign debts should not exceed 50% and 45%, respectively.

The Standing Committee of the National Assembly (NA) revealed such figures in a meeting on July 13, after having reached an agreement with the government on socio-economic targets for the next five years.

Other key targets include state budget revenue would be VND8,300 trillion (US$359 billion), a 1.2-fold higher than in the previous five-year period, in which taxes and fees are set to make up 13.4% of the total.

This would result in a budget deficit of $86.7 billion, or 3.7% of the GDP. The NA’s Standing Committee expected the government’s direct debt payment obligation should not be above  25% of the state budget revenue.

For the mid-term public investment plan of the 2021-2025 period, the investment capital is set at VND2,870 trillion ($124.07 billion). Of the total, VND100 trillion ($4.32 billion) would be allocated for three national programs on socio-economic development for ethnic minority groups, new-style rural areas, and poverty reduction.

The government also plans to set aside VND183.25 trillion ($8 billion) for projects of national priority, including the site clearance for the construction of Long Thanh International Airport and Phase 1 of the Eastern North-South expressway and the Ham Thuan Nam reservoir, the three would be allocated VND65.8 trillion ($2.84 billion).

Phase 2 of the North-South express railway project would receive VND38 trillion ($1.64 billion), and an estimated VND78.8 trillion ($3.4 billion) would be earmarked for other expressway projects.

While there has been a detailed list of national projects for budget allocation, NA Chairman Vuong Dinh Hue urged the government to set up an investment plan to avoid possible delays during the implementation process.

Hue also called for the government to pay more attention to support policies for nurturing tax revenue sources, saying this would “create the driving force for growth.” 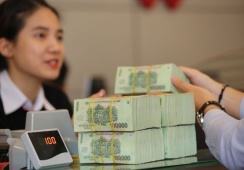