The surge in gold demand comes from fears of inflation and the weakness of the Vietnamese dong.

Vietnam’s consumer demand for gold surged 11% year-on-year in the second quarter of this year as inflation concerns lead to people's investment in safer assets.

The World Gold Council (WGC)’s report on demand trends showed that demand for gold in the country was estimated to total 14 tons in the second quarter of this year.

Demand for gold bars and coins rose 5% to 9.6 tons in the period, while demand for jewelry increased 28% to 4.5 tons.

Andrew Naylor, head of ASEAN and Public Policy at the World Gold Council, said the surge in gold demand came from fears of escalating inflation and the weakness of the Vietnamese dong.

“The strong increase in jewelry demand compared to the same period last year was also attributed to the decline in domestic gold prices and the optimism of consumers amid the global economic recovery, along with a stimulus package worth US$15 billion proposed by the Vietnamese government,” he added.

Last year, Vietnam was the largest gold-consuming market in Southeast Asia and among the top 10 in the world, according to a report on personal gold investment in Vietnam, conducted by the WGC. More than 80% of respondents, who invested in gold in the last 12 months, may buy more in the coming time. The number was higher than the global average of 45%.

“Investors’ interest in gold is great as they believed that gold helps fight inflation and currency fluctuations, making them feel secure in the long term," the report wrote.

The demand for gold in the country is very strong. When the financial system in the country develops, it will lead to the development of the gold market, increasing the accessibility and confidence in gold. 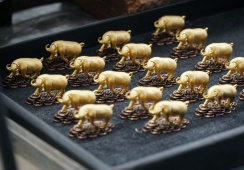