Vietnam’s export turnover may expand by 10% this year, exceeding the original target of 4-5% set by the Government.

With trade turnover as of mid-October surpassing over US$510 billion, the Ministry of Industry and Trade (MoIT) expected the figure to reach an all-time high of $600 billion by the end of this year.

“The actual result, however, would depend on Vietnam’s efforts to contain the pandemic,” said the MoIT.

In the first half of October, the country’s trade revenue was estimated at over $26 billion, of which exports amounted to $13.16 billion, and imports of $13 billion. Of the total, four goods categories recorded an export turnover of over $1 billion were smartphones, computers, and electronic products, machinery and equipment, and garment.

Overall, Vietnam recorded a trade turnover of $254 billion as of the present and imports of $256.45 billion, resulting in a trade deficit of $2.45 billion.

For the remainder of the year, the MoIT said it would continue to provide support measures for local traders to boost exports and gradually narrow the trade deficit.

“A combination of Covid-19 restriction measures and efforts to address difficulties in movements of goods is essential,” added the agency.

During the monthly press conference held late September, Vice Minister of Industry and Trade Do Thang Hai said effective utilization of free trade agreements (FTAs) that Vietnam is a part of would be the key solution to raise export turnover, especially the next general trade such as the CPTPP, EVFTA or RCEP.

“Vietnam’s export turnover may expand by 10% this year, exceeding the original target of 4-5% set by the Government,” Hai said.

Assuming no major Covid-19 outbreaks from now until the end of this year, the MoIT expects businesses in Vietnam’s main manufacturing hubs in the southern region to accelerate production and soon balance the trading account, or even earn a trade surplus in case of favorable conditions emerge. 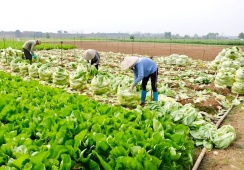