A joint online music performance by Vietnamese and German artists will help connect electronic music lovers from all over the world.

The Goethe Institut in Hanoi will hold an electronic concert titled ‘Listening to What’s Left… and More to Come’ on July 5, with the performance of Cedrik Fermont (Germany) and Nhung Nguyen (Vietnam).

The two artists first met in Hanoi in 2019, but earlier, in 2016, Nhung Nguyen had already been featured in Cedrik Fermont and Dimitri della Faille’s book called “Not your world music: Noise in South East Asia”.

This new music project is a joint effort between the two artists in order to explore the possibilities of virtual collaboration, diversifying soundscapes, and people’s experiences around the world.

The two artists are interested in soundscapes in cultural context as well as in electro-acoustic music and sound art. For this project, they will utilize their personal field audio archives recorded during the pandemic-lockdown periods in both countries and use them as a starting point for both the research and the production of the show.

The research project will include a series of interviews with people in Germany and Vietnam about their personal experience with the soundscapes around them, especially during the pandemic period, and how to cope with the current lockdown situation.

The approach will be either live or online interviewed in Vietnam and Germany in order to collect short voice notes. The responses will be translated and used as a reference and audio material for the performance.

Cedrik Fermont alias Kirdec was born in 1972 in Zaire (Congo). The Berlin-based artist has been involved in the electronic and experimental music network since the late 1980s.

Nhung Nguyen, born in 1998, is an emerging Vietnamese sound artist who is working and living in Hanoi. She is now experimenting across a range of left-field aesthetics and expressions. Since 2014, Nhung has been making works under the moniker Sound Awakener and collaborated with international labels. In addition to her solo work, she has collaborated with artists from various other disciplines, often adding audio elements to visual experiences.

The concert will be broadcast live on the Facebook of Goethe Institut (www.facebook.com/Goethe.Institut.Hanoi). 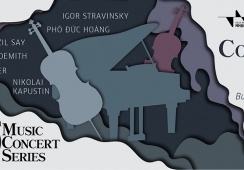 Music of the 20th century - Concert No3 to perform online