Many Hanoians eager to travel on sky train

Not only locals who live near the Cat Linh-Ha Dong urban railway line give up their private vehicles to take the sky train, but also those who are far from the metro line stations choose the elevated railway.

Hanoi's Cat Linh-Ha Dong metro line, the first of its kind in Vietnam, is part of local authorities' efforts to convince the locals to abandon their private vehicles for public transport.

The operation of the sky train brings high hope that residents who live near this route are able to travel to Hanoi's downtown without having to endure rain, pollution, and the frustrating daily experience of being stuck in traffic jams.

On the first day of ticket sales on November 21, many people have chosen to buy a monthly pass for their daily commute. Coming to Yen Nghia station from 7:00 am daily to work, Nguyen Thi Thanh, living in Hanoi’s outskirt district of Hoai Duc, said she had experienced riding on the elevated railway and found the commuting very convenient.

“I decided to give up my motorbike and buy a monthly ticket to travel to Ba Dinh District where my workplace is located by the sky train. It takes me less than 10 minutes to walk from home to Yen Nghia station and then take a sky train ride, which is really smooth and convenient as I no longer face traffic jams. The cost for a monthly pass is also much cheaper than my spending on gasoline,” Thanh told The Hanoi Times.

As one of the customers who bought a monthly ticket at Ha Dong station, Dang Ngoc Huan from Ha Dong District shared that since this metro line started carrying passengers for free, he has chosen it as a means of transport to work instead of his car as before.

According to Huan, his house is less than 300 meters from Van Khe station, while his office is only 1 kilometer from Cat Linh station, so it's convenient to travel by the elevated railway.

“In the morning, it takes me only four minutes to go to the metro station and then a ten-minute walk from the stop to my office, so I chose this way to reduce traveling costs,” Huan said.

Not only do those who live near the Cat Linh-Ha Dong urban railway line give up their private vehicles to take the sky train, but also those who are far from the metro line stations also choose the sky train.

Nguyen Quoc Hoan, living on Hoang Hoa Tham Street of Ba Dinh District said that his house is about 3km from Cat Linh terminal. However, for the past two weeks, he has been riding a motorbike here every day to take the sky train to his office on Quang Trung Street in Ha Dong District.

“I am so fed up with the constant traffic jams on streets in rush hours. Now I probably won’t have to worry about commuting through the congested streets every day. For me, it is clear that taking the Cat Linh-Ha Dong metro line saves both time and money. It is also safer, without the pressure of traffic jams and environmental pollution,” Hoan told The Hanoi Times.

The number of customers buying monthly passes increased by 5-10%
Talking to The Hanoi Times, General Director of Hanoi Urban Railway Company Limited (Metro Hanoi) Vu Hong Truong said that in 15 days of a free ride, more than 380,500 passengers took the sky train, an average of 25,360 passengers per day.

The first day of ticket sales [November 21] was a weekend, but 25,320 passengers rode on the Cat Linh-Ha Dong metro line, equivalent to the average of 15 days of free service.

The spokesperson for the Metro Hanoi said the number is low because students have not returned to school due to the Covid-19 pandemic.

“In the first five days, urban railway officially sold tickets, the number of people buying monthly tickets rose by 5 to 10% every day. This is the goal of the urban railway when put it into operation, contributing to limiting travel by private vehicles and reducing traffic congestion,” Truong said.

Compared with its designed capacity, the number of passengers using the line is less than desired. "In the future, we will roll out different measures to encourage people to use the line more. Foreseeing high demand to travel the last mile to the stations, Hanoi authorities have opened 53 bus routes running near the metro. Parking lots have been set up at the last stations," he added.

Affirming that the target customers of the urban railway are those who travel frequently at peak hours to avoid congestion, Truong said that with the steady flow of train passengers and an increase in monthly ticket purchasers, it can be seen as a promising sign of the service.

“However, a single metro line is not enough to radically resolve Hanoi’s traffic issues as each mode of urban transport only meets certain commuters. The Cat Linh-Ha Dong metro line would help increase the number of commuters using public transport, and together with the nine other routes planned, form a system that will reduce traffic congestion. Hanoi needs a network of mass rapid transit systems,” Truong told The Hanoi Times.

He made it clear that only when a complete urban railway network is formed, can the fundamental problems of traffic congestion in big cities be solved.

Director of the Viet Duc Transport Research Center Vu Anh Tuan assessed that the Cat Linh-Ha Dong route is the first urban railway line to be put into operation, so too much expectation should not be placed on changing modes of travel in Hanoi's residents.

“The Cat Linh-Ha Dong metro route has kindled hopes among local residents that the city's public transport infrastructure would catch up with the level of other advanced Southeast Asian nations. This is just a single line, so the urban railway backbone network has not yet been formed,” Tuan told The Hanoi Times.

With a total investment of approximately US$868 million (up to US$315 million compared to initial estimates) and funded by China’s official development aid, the elevated line is more than 13 kilometers long and has 12 stations and 13 trains. Each train, whose designed speed is 80km per hour, has four carriages capable of carrying more than 900 passengers.

The monthly pass costs VND200,000 (US$8.8) per person, VND100,000 (US$4.4) for students and workers in industrial parks. People with meritorious services, the elderly, people with disabilities, children under six years old, and members of poor households travel for free.

It is one of 10 metro routes planned for Hanoi by 2030 with a total length of 417 kilometers. Another route, the Nhon-Hanoi Railway Station, is under construction. Its elevated section is set to become operational by the end of 2022. This route, built with French technology and standards, will be linked to the Cat Linh-Ha Dong route. 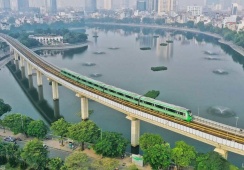 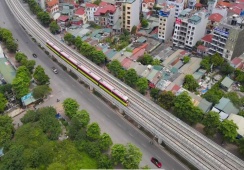