In recent months, the market has experienced a significant decline in transactions, as many projects have not been able to proceed due to lack of capital.

Prime Minister Pham Minh Chinh has decided to set up a task force specialized in dealing with concerns of businesses and localities in real estate projects.

Members of the task force would include senior officials in fields of construction, finance-banking, planning and investment, natural resources and environment, and public security.

According to the Government’s decision, the task force would review and help sub-national governments,  businesses in major cities of Hanoi, Ho Chi Minh City, and other provinces/cities remove bottlenecks in implementing real property projects.

In addition, members of the task forces would propose changes to regulations related to land management, if needed.

A recent report from the Ministry of Construction showed real estate sector remains a key component of the economy, contributing 11% of the GDP.

However, the market has seen a significant drop in transactions in recent months, and many projects have not been able to proceed due to lack of capital.

Experts attribute the problem to the government's restriction of bank credit in the market, along with strict regulations on the issuance of corporate bonds.

Meanwhile, those struggling with a lack of working capital have to resort to borrowing from other sources at high interest rates.

Such a situation has impacted the real estate market in Hanoi. The city's housing supplies in the third quarter of 2022 dropped by 39% year on year to 3,600 units, the lowest figures in the past several years, according to the municipal Department of Construction.

The department said most new supplies came from existing projects, concentrating in the districts of Hoang Mai, Long Bien, and Ha Dong, where land reserves are still abundant.

They, however, are in the mid-priced to luxury segment and away from the city center.

The shortage of new projects and rising building materials, meanwhile, have contributed to rising housing prices in Hanoi, up 5% from early 2022. 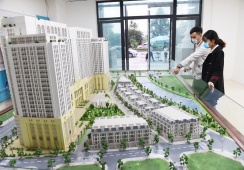