The lack of mid-and long-term investment in the real estate market and ambiguous regulations related transactions are hampering its healthy development.

The Government of Vietnam is expected to tighten control over the mobilization of capital through the securities market by real estate companies.

Minister of Construction Nguyen Thanh Nghi stated in a report submitted to the National Assembly before a hearing on November 3.

According to Nghi, the local property market contributed around 11% of the total budget revenue, in which the real estate transaction activities made up 0.5 percentage points to the overall GDP growth.

In this sense, Nghi said there is an imbalance in the capital structure in the real estate market, which comes mainly from banks’ credit, corporate bonds, and advance payments from customers.

The capital contributed by investors makes up 15-30% of the total investment projects, Nghi said, noting an absence of mid and long-term capital sources for the market.

This issue, along with the lack of transparency in real estate transactions, is hampering the healthy development of the market in long term, he added.

"Real estate prices, especially housing and land prices, have been steadily rising and have remained out of reach for most people. This has made it impossible for low-income people in cities and workers in industrial estates to purchase housing," Nghi said.

To prevent market price manipulation and speculation, Nghi called for tightening control over the capital mobilization by real estate companies in the stock market.

"It is necessary to monitor all processes related to corporate bond issuance, especially through the private placement of real estate companies, or those with a high volume of bond issuance, with high interest rates, operating at a loss, or issuing bonds without collateral assets," said Nghi.

In this regard, Nghi called for government agencies to supervise the credit channeled into the real estate market while giving priority to social housing projects with high rates of return.

The Covid-19 pandemic has caused severe impacts on the real estate market in the past two years, but housing prices have been on the rise due to scarcity of new supplies and high demands.

The minister noted there have been no housing projects in downtown areas of urban cities with apartment prices below VND25 million ($1,000) per square meter, and a handful of those at the price range of VND25-30 million are mostly located in suburban areas.

During the first nine months of 2022, the number of commercial housing projects completed stood at 63 with nearly 15,000 apartments, down by half compared to the same period of last year.

In addition, the number of new projects getting licenses was 104 with 49,737 apartments during the period, equivalent to a rise of 51% year on year.

Housing prices in Hanoi are on an upward trend

The average housing prices in Hanoi in the third quarter maintained an upward trend by an increase of 5% against early 2022.

According to the Hanoi Construction Department's reports on the city's real estate market in the third quarter, supply remained tight, mainly due to the toughened  banks' credit policy for real estate projects and complicated investment procedures.

In the third quarter, over 3,600 new apartment units were sold, primarily inventories from the previous quarters in Hoang Mai, Long Bien, and Ha Dong districts.

The report also noted that the increase in house prices in Hanoi was mainly due to supply shortages and rising building materials.

In the June-September period, the number of apartments sold accounted for 10% of the total on offer, mainly in the luxury segment with high prices, such as the T&T Capella Pham Ngoc Thach at VND80 million per square meter.

Apartments in the mid-price range of less than VND40 million per square meter came from Long Bien, Me Linh districts, including EuroWindow River Park with prices of VND30-32 million per square meter; Binh Minh Garden with VND34-38 million; Le Grand Jarmin with VND38 million, as they were 10% higher than prices quoted in the same period last year, and 2% against the second quarter. 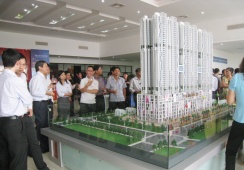 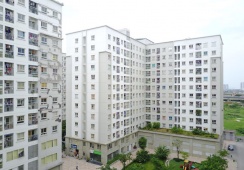 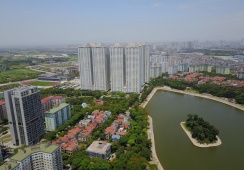