Foreigners are eligible to own houses in a tenure of 50 years with renewal possibility.

Hanoi’s Department of Construction has announced a list of 10 housing projects that allow the ownership of foreign individuals and organizations.

The projects are located in the districts of Nam Tu Liem, Ha Dong, Cau Giay, and Thanh Xuan.

Other places include HH2-1A building of Golden Palace A in Me Tri and Phu Do wards invested by Mai Linh Investment JSC, and Dolphin Plaza in My Dinh 2 ward invested by TID Joint Stock Company.

Under Vietnam’s revised Law on Housing that took effect from July 2015, all foreigners who are granted a visa to the country and not entitled to privileges and diplomatic immunity are eligible to buy not only apartments but also landed property (villas and townhouses), and their home ownership rights have been significantly relaxed.

The total number of units owned by foreigners must not exceed 30% of the total units in one condominium complex, or 250 landed property units in one particular administrative ward or its equivalent.

Foreigners can buy houses from developers of residential projects on the primary market and only from foreign individual/entity owners (not from local owners) with the remaining ownership tenure (renewal possibility available upon expiry) on the secondary market, according to CBRE. 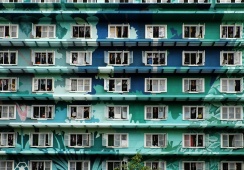