Hanoi is taking steps to realize Politburo’s resolution No/15 on objectives for the development of Hanoi until 2030, with a vision to 2045, with investment in road infrastructure seen as a breakthrough solution.

Vice Director of Hanoi’s Department of Transport Tran Huu Bao told The Hanoi Times about the city’s plan to enhance the road infrastructure capacity, which would serve as the driving force for socio-economic development.

Could you give an overview of the current status of Hanoi’s road system?

Over the years, Hanoi’s mass transit network has significantly improved with 154 lines, including 132, which the municipal government subsidies. Recently, Hanoi has operated the urban railway line Cat Linh – Ha Dong and some bus lines using clean energy, meeting 30% of the public demand.

In the coming months, we expect railway line No.3, section Nhon – Hanoi station, will soon be launched and further enhance the city’s public transport capacity.

What is the current progress of Hanoi’s investment in transport infrastructure?

A critical project that Hanoi focuses on is Ring road No.4. The city is accelerating the site clearance to ensure the Ring Road 4 project's construction is started in 2023.

Seven of the nine expressways connecting Hanoi with other localities have been completed. The investment procedures for the Noi Bai – Ha Long and Northwest region – national road No.5 will be completed soon.

Eight out of the total 11 radial roads have been completed so far, and the other three, namely the radial road in the south, the section Ngoc Hoi – Phu Xuyen, the road running from Tu Lien bridge to Hanoi – Thai Nguyen expressway will be built soon.

Hanoi also finished nine out of 18 bridges crossing the Red River and four out of eight crossing the Duong river. We are working on other projects to ensure the completion of Hanoi’s transport system shortly.

What are the city’s solutions to create breakthroughs in transport infrastructure development?

In recent years, Hanoi’s authorities have been working hard to expand the city’s transport infrastructure, especially in drafting future planning to harmonize regional and national planning.

Hanoi is taking steps to realize Politburo’s Resolution No.15 on objectives for the development of Hanoi until 2030, with a vision to 2045.

The resolution includes investments in the network of bridges crossing the Red and Duong rivers, with the immediate goal of completing the Vinh Tuy Bridge - phase 2 in the 2021-2025 period, starting construction of five bridges, including Thuong Cat, Van Phuc, Hong Ha, Me So, Duong 2, and completing the preparation for Tu Lien and Tran Hung Dao bridges.

These projects are essential and contribute to strengthening the links between Hanoi and neighboring cities/provinces while promoting socio-economic development and ensuring regional security defense, with Hanoi as the center.

What would be the priorities for Hanoi to improve its public transport system?

Hanoi targets its public transport system to meet at least 40% of public demand. This would require the following solutions:

Firstly, to modernize and enhance bus service quality. Secondly, expanding the mass transit coverage and raising public awareness of its advantages. Thirdly, strengthening the linkage between different public transport modes and fourthly, improving the effectiveness of the current public transport system to address any issue, if needed. Fifthly, promoting science and technology in developing public transport models, especially mass transit modes. Sixthly, It needs to encourage investment under the Transit Oriented Development (TOD) model to utilize land surrounding urban railway stations, considering it a viable option to raise funds for railways for these projects themselves. 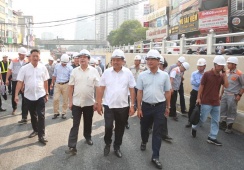 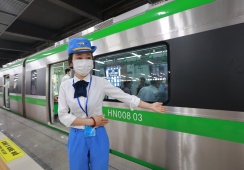