For the 2022-2025 period, the city aims to invest in 1,469 projects in education, healthcare, and cultural preservation with total capital of VND49.2 trillion (US$2 billion).

The Hanoi authorities will focus their resources on carrying out investment projects in three priority areas: health, culture and education in the 2022-2025 period.

Chairman of the Hanoi People's Council Nguyen Ngoc Tuan gave the information during a  meeting of the Steering Committee on upgrading public schools to national standards, the healthcare system and heritage preservation on October 31.

To ensure the effective implementation of these projects, Tuan urged localities to set up their respective Steering Committees and report the progress to the city on a monthly and quarterly basis.

At the meeting, Director of Hanoi’s Planning and Investment Department Do Anh Tuan said for the 2022-2025 period, the city aims to invest in 1,469 projects in education, healthcare, and cultural preservation with total capital of VND49.2 trillion (US$2 billion).

According to Tuan, districts and wards are expected to allocate VND15.8 trillion ($635.3 million) in counterpart funds, but the actual figure at present stands at VND677 billion ($27.2 million), or 11.2% of the plan.

Tuan expressed concern that several districts have been behind the schedule in providing counterpart funds, such as Thanh Oai, Ung Hoa, Son Tay, Soc Son, or Phuc Tho, and only Dong Anh, Dan Phuong, and Quoc Oai have reached 40% of their respective targets.

Providing a more detailed overview of the projects under the city's administration, Tuan said local units are preparing reports to apply for the investment approval process for 147 of the 236 projects. Of these, 55 have been approved by the competent authorities, 18 are being formulated and 11   completed.

Meanwhile, the city is expected to provide financial support to 1,038 district-level projects during the 2021-2025 period. To date, 464 projects are drafted, or 42% of the plan, of which 120 have been completed; 427 are being prepared, and 228 are set for investment policy review.

Most of the Steering Committee members stated that the slow pace of project implementation is due to difficulties in land clearance.

In addition, rising prices of construction materials have also affected the financial capabilities of contractors, not to mention the slow approval from project owners.

Regarding cultural projects, they pointed out the complicated procedures of seeking opinions from different agencies, causing delays in the preparation.

Regarding the upgrading and construction of new public schools to national standards, the Steering Committee recognized that the rapidly increasing population in Hanoi is making it difficult for local authorities to meet national school requirements in terms of class size or a number of students.

“It is necessary to allocate additional land funds for school expansion projects,” stated the Committee.

To ensure the completion of projects on time, Vice Chairman of the Hanoi People’s Council Pham Quy Tien called for all city units to complete providing counterpart funds for all projects in 2022, and report difficulties back to the competent authorities for timely intervention.

Sharing Tien's view, Vice Chairman of the Hanoi People's Committee Chu Xuan Dung requested the municipal Department of Education and Training and the Department of Health to address any issue related to public school and healthcare projects.

For the 2021-2025 period, Hanoi sets to earmark VND650 trillion ($28.4 billion) for the public investment plan, seen as a breakthrough solution to realize socio-economic development goals for the period. 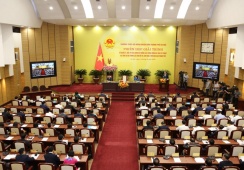