Hanoi is scheduled to announce an economic recovery plan in line with Covid-19 control and prevention.

Hanoi's authorities will provide further support for businesses to ensure it is on right track to realize the export target of US$17 billion and recover the economy this year, according to Tran Phuong Lan, acting Director of the Hanoi’s Department of Industry and Trade.

"The city is set to soon announce an economic recovery plan in line with Covid-19 control and prevention, which would serve as the basis for each district, unit, or department in their own recovery plan to promote trade, services, and logistics activities, in turn stimulating consumption, investment, and tourism," Lan said.

Statistics from Hanoi’s Department of Industry and Trade revealed despite the severe impacts from the fourth Covid-19 outbreak, the city’s export turnover in the third quarter still rose by nearly 1% against the previous quarter to $4 billion.

“Strong results gained during the past periods were thanks to local firms having drafted backup plans from early 2021 to mitigate risks and impacts from the pandemic,” noted the municipal Department.

Vice General Director of the Hanoi Trade Corporation (Hapro) Le Anh Tuan said amid the disruption of global supply chains and cancellation of contract orders from abroad, the firm has been actively looking for new markets and working on new products.

“Effective utilization of free trade agreements that Vietnam is a part of remains a key solution for local firms to boost exports,” Ket told The Hanoi Times, adding the recovery of traditional markets such as the EU, US, or Japan has also been a positive sign for Vietnamese companies.

Despite the positive results in export activities, the Covid-19 pandemic remains a huge challenge for local traders due to rising logistics costs and risks of labor shortage from mobility restriction.

On this issue, experts suggested local authorities soon draft economic recovery plans for the remainder of the year, especially those of major export hubs such as Hanoi or Ho Chi Minh City.

“Along with market diversification, firms have to take advantage of economic recovery from major markets, such as the US or Europe, to push for higher export turnover in key commodities such as garment, footwear, electronics, or wooden products, at the year-end shopping season,” he suggested.

Vice General Director of Thuong Dinh Electrical Wires and Cables Company Huynh Tan Quyen called for authorities of Hanoi and the Ministry of Industry and Trade (MoIT) to continue supporting companies by lowering logistics costs and extending payment schedules of taxes and fees.

Regarding these issues, Acting Director of the Hanoi’s Department of Industry and Trade Tran Thi Phuong Lan said the agency would continue to provide online training courses for local firms on next-generation FTAs, including the EVFTA, CPTPP, or RCEP, along with a strong push in administrative reform and trade promotion. 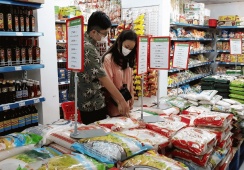