Hanoi to hold dialogue with local businesses this month

The dialogue aims at improving the business environment and enhancing national competitiveness in 2021.

Hanoi's authorities and businesses will spend their time together addressing problems that have been hampering the local economy for months and promoting recovery plans to return life to normal.

Specific actions will be made at a dialogue that is set to take place early this month. Local authorities want to listen to recommendations from local businesses and provide them with efficient supports.

The dialogue will be organized by the Hanoi Promotion Agency (HPA), a managing body for trade, commerce, and tourism promotion in Hanoi. It follows the success of the previous dialogue between Hanoi’s leaders and foreign businesses affected by the pandemic held in the capital city in October.

“The dialogue is part of the municipal Government’s efforts in further improving the country’s business environment and enhancing national competitiveness in 2021,” said HPA Director Nguyen Anh Duong, expecting the participation of 150 delegates from the central Government, the city’s authority, local business association, households and craft villages.

“At the conference, Hanoi’s leaders would inform the business community on the socio-economic situation and efforts to address their concerns,” he added.

A report from the municipal Department of Planning and Investment said the number of newly-established enterprises in October was estimated at 2,298,  a 2% drop year-on-year. This resulted in a total of 19,800 new businesses in the first ten months of 2021, a decrease of 10%  over the same period of 2020.

While the pandemic has no doubt posed severe hardship on the business community, they remain an integral part of the local economy and contributed to Hanoi’s exports of US$12.3 billion during the period, of which domestic companies made up  $7 billion, and the foreign-invested sector $5.4 billion.

According to the Vice Director of Hanoi’s Department of Industry and Trade Dam Tien Thang, the local business community called for the city to continue providing support in forms of waiving and lowering taxes, land rental fees, or access to preferential loans.

“Businesses expected to have greater autonomy in drafting their own Covid-19 prevention strategy,” Thang told The Hanoi Times.

“Hanoi should further push for administrative reforms so as to enhance the business environment for greater competitiveness,” Quyen told The Hanoi Times.

Quyen added the city should give companies permission to control the movement of their workforce, rather than giving the responsibilities to the localities.

Vice General Director of Rang Dong Company suggested the city should provide detailed instructions on how companies may access new preferential policies on waiving or freezing payment of taxes and fees. 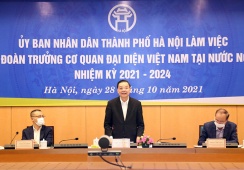