The smart electric buses have a friendly design with green as the thematic color, conveying the ecological message of the vehicle.

Nguyen Kieu Oanh, a resident living in the building S2.11 of Vinhomes Ocean Park (Gia Lam district in Hanoi), said that although newly launched and only tested in her urban area, the first smart electric buses have shown their advantages.

"The smart electric bus runs very smoothly, we don’t have to suffer the benzene smell as in gasoline buses and feel very comfortable," Oanh told Hanoitimes.

Besides, the smart electric buses have a friendly design with green as the thematic color, conveying the ecological message of the vehicle, Oanh added.

Nguyen Thanh Dong, a driver of VinBus Transport Services Limited Company said that each smart bus is equipped with an automated system able to control driving behavior and give warnings about unsafe situations.

Especially, the smart electric buses automatically lower when picking up and dropping off passengers, that is suitable for the elderly, children, the disable, and pregnant women.

The center and VinBus Transport Services Limited Company are waiting for the completion of procedures so that smart electric buses can join the capital city bus network, Phuong said, adding that fare policy for smart electric buses is similar to the current bus system and passengers can use their regular monthly tickets to travel on these buses.

“We believe that smart electric buses will make a difference, not only enhancing people's traveling experience but also a poke to transform the commuting habits of the community, thereby minimizing air and noise pollution and contributing to green transport in Hanoi,” Phuong told Hanoitimes.

Relevant agencies and units are urgently completing the final stages so that smart electric buses would be ready to be put on use in the city’s mass transit network from late second quarter of 2021.

The buses are manufactured and assembled by automaker VinFast at its factory in Hai Phong City, around 120 kilometers from Hanoi.

With a battery capacity of 281 kWh, the bus can travel between 220 and 260 kilometers on a single charge, carrying 68 passengers at a time.

VinBus plans to make 200-300 vehicles a year in the coming years and run them on 15 bus routes in Hanoi, Ho Chi Minh City, and Phu Quoc City.

The bus service is part of the company’s aim of developing a modern public transportation system that reduces air and noise pollution in Vietnam’s major cities. 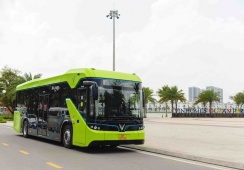