The real estate market is expected to heat up in the remainder of the year, thanks to the bright economic outlook, the Government’s push for major infrastructure projects, and high demands for housing.

The reopening of the economy in early 2022 and the effectiveness of new policies are set to lay the ground for strong growth of the real estate market during the remainder of the year.

Two years since the Covid-19 outbreak, the market has gradually adjusted to new changes in the post-pandemic period, resulting in a higher number of transactions against the same period of last year.

The market, however, remains imbalanced with high demand for housing amid scarce supplies. In Hanoi, prices of apartments have increased by 13% year-on-year, The market, however, remains lopsided with high demand for housing amid tight supplies. In Hanoi, apartment prices have risen 13% year-on-year, marking the fourth consecutive year of increase.

Meanwhile, prices of detached houses and villas have gone up 2-2.5-fold amid rising demands.

A survey from the DHRA Vietnam revealed the segment of villas and detached houses has set up a new price range at VND700 billion ($30 million) per house.

Danang, seen as a major tourist hotspot in the central region, has also seen housing prices go up by 2-4 fold against the pre-Covid-19 pandemic.

Despite the rising house prices, new supplies continue to stay low. Data from the Ministry of Construction noted since the beginning of the year, the country records 40 new commercial housing projects, equivalent to 41% of the same period last year.

“There remains inconsistency in regulations related to real estate management, along with the lack of clear policies on the transparency and publicity of the planning process,” economist Can Van Luc, a member of the National Financial and Monetary Advisory Council, told The Hanoi Times.

Luc also pointed out complicated procedures in the investment process for real estate projects, while the digitalization in the sector has been slow compared to other economic fields.

However, experts are of the view that the market would heat up in the remainder of the year, thanks to the bright economic outlook, the Government’s push for major infrastructure projects, and high demands for housing.

In recent months, the authorities have also tightened management of the market, which in the long term would ensure its healthy development and sustainable growth.

Recently, the National Assembly and the Government have approved major stimulus packages for the economy in general, and real estate in particular, including a fiscal package of VND350 trillion ($15 billion), and a 2%-interest rate subsidy scheme worth VND40 trillion ($1.7 billion).

Such a positive sentiment also comes in line with the view from market research conducted by the real estate website batdongsan.com.vn, which expected over 54,000 new products would be listed during the 2022-2023 period. 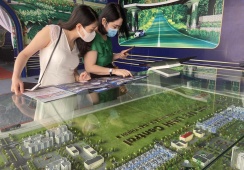