After more than 10 years of the expansion of the administrative boundaries, one of the obvious changes that Hanoi has achieved is the more modern and civilized urban appearance.

This results from the planning work which is considered the city’s most important task which was implemented in time. After the Hanoi construction master plan to 2030, vision 2050 was approved by the Prime Minister in 2011, a number of zoning plans are made as a basis for the urban construction and development.

The expansion of the administrative boundaries, the territorial extension of Hanoi facilitates the large-scale process of urbanization, especially after the master plan was approved as a breakthrough in the goal of building a modern capital.

With the development of urban space as planned, Deputy Director of Hanoi Department of Planning and Architecture, Nguyen Trong Ky Anh, said that by September 2020, 100 per cent (32/32 projects) of the city’s area was planned and the zoning plans reached 80 per cent (27/35 projects). In addition, the city has also approved 88 new planning projects with a total area of about 4,386.2 ha, 80 boundary line profiles of important routes; and other architecture projects.

The city has also researched a number of specific plans such as the underground system, traditional craft villages combined with tourism, Hanoi Railway Station and its surroundings, architectural management regulations (in the Old Quarters and historical areas), and other planning management.

In particular, the planning of the largest satellite town, Hoa Lac City, approved by the Prime Minister in the master plan until 2030, was launched by Hanoi City in July. These can be considered as optimistic signs in the implementation of the construction of satellite cities in Hanoi to reduce the pressure on population and infrastructure for the central urban area.

On the basis of the approved planning projects, the construction and development of urban space has attained some initial achievements. New and civilized urban areas have been built  such as: Van Quan, My Dinh, Mo Lao, An Khanh ... to the West; Viet Hung, Vinhomes Riverside at the East; Linh Dam, Garmuda to the South; and Ciputra in the North, along with new urban areas along the Highway 3 such as Royal City, Times City, Trung Hoa - Nhan Chinh…  Those new housing developments have created a new face for the capital after 10 years of development.

Currently, the city is promoting the development of urban areas in the North in Dong Anh district with some national and international projects such as Kim Quy park, National Exhibition Center, Smart City on both sides of the Nhat Tan - Noi Bai International Airport route.

According to the urban planning experts, besides the outstanding achievements, there are difficulties in the planning management and implementation in Hanoi such as the construction density, the increasing population, the slow development  for functional zones, satellite cities, and highway construction and so on.

Chief of Office of Vietnam Association of Architects Pham Thanh Tung said that Hanoi is one of the two largest cities in the country so the pressure of the rising population along with shortcomings in planning and construction of many previous stages of the capital development are the biggest challenges. Therefore, in the coming time, Hanoi needs to improve planning and planning management to meet the rapid development of the city.

In the next stage, Hanoi targets to pay more attention to the synchronous development and the modernization of urban and rural infrastructure, the quality of planning, and the planning management to ensure the synchronous, modern, stable, long-term and sustainable growth. The city will mobilize all resources to create a breakthrough in   infrastructure investment, especially traffic and technical infrastructure.

At the same time, it will focus on the improvement of the traffic system in the inner city area, speeding up highway and urban railway projects, and underground works associated with the development of public passenger transport. It also develops synchronously new urban areas with green and civilized standards, solves problems of urban housing, renovates old apartment buildings, enhances land management, traffic order and safety, and builds a civilized urban lifestyle.

"The target in the next five years is to implement zone planning  under the master planning of the capital approved by the Prime Minister. In these plans, we focus on the planning of Red River, Nhue River and Day River. Accordingly, Hanoi city can use the land resources at riparian areas of the rivers for urban development," Mr.Vuong Dinh Hue- Hanoi Party Secretary said. 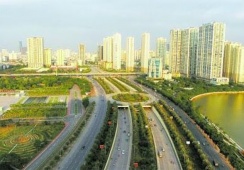 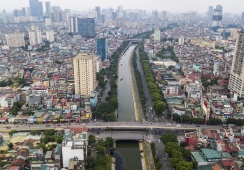