The city wants to keep population growth in urban areas at a sustainable pace and address downtown overcrowding.

Hanoi would consider setting up the "city-within-a-city" model in the north that covers three districts of Dong Anh, Me Linh, and Soc Son, and in the west with two localities of Hoa Lac and Xuan Mai.

Vice Chairman of the Hanoi People’s Committee Duong Duc Tuan, on November 21, revealed the plan as part of the adjustment of the city’s overall construction planning until 2030, with a vision to 2050.

The move is part of the city's efforts to keep population growth in urban areas at a sustainable pace; address downtown overcrowding by relocating people to surrounding urban areas; and promote the development of satellite cities, a city-within-a-city model.

According to Tuan, in addition to creating cities under Hanoi's administration, the planning adjustment would aim to increase land funds for urban development and establish smart urban zones along the Nhat Tan - Noi Bai route.

Tuan added that, until 2030, the Red River would serve as the spatial axis of the green space, surrounded by urban residential areas on river banks, allowing for urban development harmonious with nature.

Another priority in urban planning adjustment is to ensure the effective utilization of resources for consistent technical and social infrastructure development, Tuan said. “The immediate goal is to develop transport and digital infrastructure projects under the city’s vision for development,” he continued.

During this process, Tuan expected to balance historical-cultural heritage preservation, environmental protection, and economic development. He also mentioned the significance of promoting climate resilience for long-term stability and sustainability.

"The city will strengthen supervision of the development process of high-rise buildings in the downtown area and mobilize resources for the expansion of small-scale and suburban residential areas for rural development through urban-rural linkages," Tuan said.

“Overall, the final version of the planning is a scientific basis and key legal instrument for state management in terms of planning, construction, policy-making, and creating driving forces for growth,” he said.

The Hanoi Party Committee later gave its views and solutions for the adjustment process, paving the way for the municipal People’s Committee to finalize the final proposal for the planning. 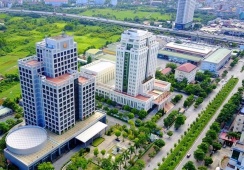 Relocation of Gov’t agency headquarters from Hanoi must comply with urban planning: Minister