The challenge now for Hanoi is to keep up the momentum in the coming time and proves such a result is not by chance.

Hanoi has made a huge jump in improving the quality of public administration by making it for the first time into the top 10  localities in the 2021 Provincial Governance and Public Administration Performance Index (PAPI).

“This shows the city’s strong efforts over the years, which have been recognized by the people,” Dang Hoang Giang, a research member of the 2021 PAPI, told the Hanoi Times on the sidelines of the report’s launch today [May 10].

“This is particularly an encouraging result as the city faced severe impacts from the pandemic and subsequent lockdown last year,” he added.

PAPI, jointly conducted by the Centre for Community Support and Development Studies (CECODES), the Centre for Research and Training of the Viet Nam Fatherland Front (VFF-CRT), Real-Time Analytics, and the United Nations Development Program (UNDP), is a policy monitoring tool that assesses citizen experiences and satisfaction with government performance at the national and sub-national levels in governance, public administration and public service delivery.

In the 2021 version, Hanoi stood ninth in the index with a score of 44.4, marking a significant improvement from a modest 41.63 in the previous year, when the city was ranked 48th out of 63 provinces/cities.

Among the eight-sub criteria, Hanoi scored the highest in “Public Service Delivery” at 7.79 out of 10, followed by “Public Administrative Procedures” at 7.53, and “Control of Corruption in Public Sector” (7.07).

“The challenge now for Hanoi is to keep up the momentum in the coming time and proves such a result is not by chance,” he said.

Among key highlights in PAPI 2021, the report shows Vietnam's improvements in basic infrastructure as citizens experienced better roads, water supply, and sanitation, while many respondents reported less crime as lockdowns and travel restrictions may have helped improve law and order.

There were, however, gaps in the national pandemic response with increasing governance challenges concerning shifts in indicators tied to Covid-19 and a deterioration in household economic confidence, it noted.

Indicative of a year when Vietnam was hit hardest by the pandemic, PAPI has detected a spike in concern regarding health – jumping from 2 to 23 % in just two years to the top of the list of citizens’ greatest worries together with national economic growth and jobs, with correspondingly diminished concerns about the environment.

Survey results also reveal a further deterioration in household economic confidence with an 11% decline from 2020 – the year that first saw a reversal in steady optimism in nearly a decade. This is compounded by a 10% rise in respondents reporting job and income losses in 2021 from 2020.

Other positive developments included the sub-dimension on public primary education bouncing back after an anomalous dip in 2020 when schools were not ready to cope with new Covid-19 challenges. During the second year of the pandemic, more than 60% of respondents in all provinces said their children’s schools were equipped with information and communication technology to facilitate online studies. A lower percentage, however, was found in mountainous or poorer provinces.

“These findings are important for deepening our understanding of the impacts of the pandemic on democratic governance, that in turn can help support the government - at both central and provincial levels - in preparing for future economic and health crises,” said UNDP Resident Representative in Vietnam Caitlin Wiesen.

Sharing Wiesen’s view, Cherie Russell, development counselor at the Australian Embassy in Vietnam, one of the three parties co-funding the PAPI since 2018 alongside the Embassy of Ireland and UNDP in Vietnam, noted the PAPI is crucial by allowing governments at all levels to improve its decision making, policies and service delivery to communities based on credible data from citizens.

“As Vietnam seeks to move towards upper middle income and then high-income status, it will be vital that governments can understand their citizens’ experiences and adapt and improve their policy approaches based on real-time feedback,” he said.

PAPI has a record number of one-on-one interviews conducted with 15,833 respondents from across 63 provinces in 2021. Building on its successful pilot study from the previous year, PAPI further explored migrants’ access to good governance and quality public services. The 1,042 non-permanent residents from 12 provinces with the highest net ratios of internal migrants revealed that the pandemic had exacerbated governance challenges for migrants and residents in receiving provinces.

Migrant equality was a matter of concern as a result of the Covid-19 pandemic in 2021, with clear differences also visible between the demographics of migrants and permanent residents. However, interestingly, fewer residents in all provinces expressed a desire to migrate in 2021 amid the sharp economic contraction resulting in large-scale losses of income and jobs. Three key reasons for wanting to move in 2021 were family reunions (to move to Hanoi and Ho Chi Minh City), better jobs (Ho Chi Minh City, Hanoi, and Danang), and a better natural environment (Danang and Lam Dong).

Speaking at the launch, Vice President of the Central Committee of the Vietnam Fatherland Front Nguyen Huu Dung stressed the significance of PAPI in promoting vertical accountability towards citizens and contributing to innovation in the public sector to meet the Communist Party of Vietnam’s recently set motto that “people benefit”, aside from the conventional aims of “people know, people discuss, people do and people verify” in grassroots democracy implementation.

“This is in line with the spirit of the proposed Law on Implementation of Grassroots Democracy at the Commune Level to be discussed at the National Assembly this year,” he said. 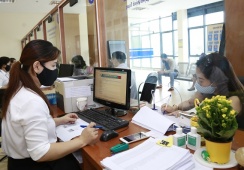 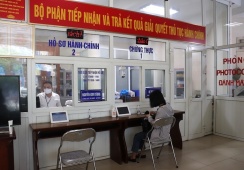