The determining factor for the success of the administrative reform is the attitude of public servants towards the people and companies, based on current work procedures.

Administrative reform continues to be among the key objectives for Hanoi and receives high public attention.

Chairman of the Hanoi People’s Committee Tran Sy Thanh stressed orientation at the city’s conference on August 18, discussing the efficiency of administrative reform in the capital city in 2022.

According to Thanh, the determining factor for the success of the administrative reform is the attitude of public servants towards the people and companies, based on current work procedures.

“But no matter what is the design of the system, the human factor and their working relations within it are decisive,” said Thanh.

Thanh called for each agency, unit, and locality to draft plans to address their shortcomings and improve quality in administrative reform.

“Leaders should set an example for others to create an attitude change among the public staff, to put people at the center of their services,” he added.

At the conference, Director of the Hanoi’s Department of Internal Affairs Vu Thu Ha said during the first seven months of 2022, the administrative reform in Hanoi has improved with the city’s 2021 Public Administration Reform Index (PAR Index) ranking 10th out of 63/provinces; the 2021 Satisfaction Index of Public Administration Services (SIPAS) rising by three places against 2020; and the 2021 Provincial Governance and Public Administration Performance Index (PAPI) for the first time stay among top 10 localities, up 39 places from 2020.

According to Ha, the city has set up a task force specializing in improving Hanoi’s performance in PAR Index and SIPAS, led by the Vice Chairman of the municipal People’s Committee.

“The focus of the task force is to address ongoing shortcomings and offer solutions in this regard,” Ha said, expecting such solutions to improve the city’s business environment and further support the business community.

Ha said the city’s online public services portal has been integrated into the national public portal to ensure data privacy and security.

“The process of receiving and processing administrative procedures is closely monitored to avoid possible delay or pestering during the process,” Ha added, and referred to over 1 million administrative requests have been processed on time, reaching the rate of 99.78%.

Pushing for decentralization in administrative procedures

“Hanoi will pilot and adopt effective models and practice in processing administrative procedures to improve public satisfaction,” he said.

Another key task mentioned by Son is to delegate responsibilities to grassroots levels to improve efficiency in the city’s apparatus system.

Deputy Minister of Internal Affairs Nguyen Trong Thua acknowledged the positive progress of Hanoi in administrative reform, seen as one of the breakthroughs for socio-economic development.

Thua called for the city to continue reviewing existing regulations and addressing possible overlapping functions among agencies in addressing people and business concerns.

“Improving efficiency in administrative works should be in line with building a civilized and cultured city, with the immediate focus on changing the impression of the people when working with public servants,” he said.

“Hanoi should play a leading role in promoting smart city and digitalization, given its huge resources and capital under disposal,” Thua said. 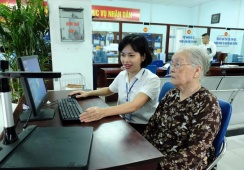 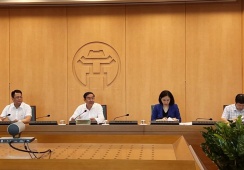 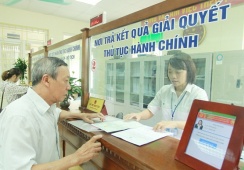